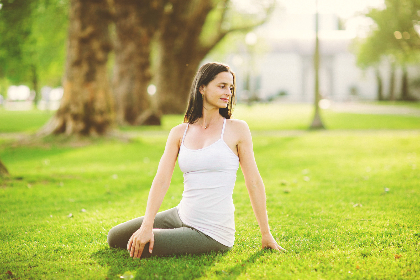 Jodi feels that yoga is a precious gift and one of the greatest influences in her life. Initially drawn to yoga for the physical benefits of becoming stronger and more flexible, she soon realized there was something even more profound than the effect it was having on her body. Yoga deeply touched her heart, spirit and mind.

Practicing yoga for many years led Jodi to seek teachers and teachings  in many places, close to home in Seattle, as well as in many parts of the world. Yoga became her passion, in addition to the work she was doing with different nonprofit organizations as a grant writer.

With a background in Iyengar, Vinyasa and Ananda yoga, a devotional style of yoga based on the teachings of Paramhansa Yogananda, Jodi draws from these traditions to create a fluid and meditative practice. She teaches to inspire others to experience yoga within all aspects of ourselves, creating a sense of wholeness among our hearts, bodies, minds, spirits and hearts. This sense of wholeness or oneness also dissolves our sense of separation from others. She encourages students to go inward; nourishing themselves, deepening their intuition and honoring the divine within.

Jodi hold a Bachelor’s Degree in Liberal Arts and a Master’s Degree in Nonprofit Leadership. Her yoga training includes completing the Ananda YTT, Seattle Holistic Center’s Hour Pre-and Postnatal YTT, Brahmani Yoga’s Advanced YTT, Baron Baptiste’s Level I and II Power Vinyasa YTT, as well as trainings with Seane Corn and Shiva Rae.  She has also completed the Silver Age YTT to teach yoga to seniors. Additionally, Jodi has been a lead teacher on the Brahmani Yoga YTT, in Goa, India, Shakti Spirit YTT, in Goa, India and Ubud, Bali and Spirit Yoga’s YTT in Osaka, Japan. She also teaches prenatal yoga on the Be Luminous YTT in Seattle, WA.

Her Ayurveda training includes studying at the Ayurvedic Natural Health Center in Goa, India, completing Dr. Robert Svoboda’s Ayurveda correspondence course through the Ayurveda Institute, Rasovai Massage School in Goa, India, attending a workshop with Dr. Vasant Lad through Bastyr and she is currently enrolled in the Ayurveda program at Kerala Academy. Jodi is also an LMP, graduating from Cortiva School of Massage in Seattle, WA.

Jodi is a registered teacher with the Yoga Alliance.