Our columnist Eve Kalinik investigates the wellness retreats where healthy eating is just as important as the stunning restorative locations.

ITHA108, ITHACA, GREECE
Nestled among olive trees with far-reaching views of the Ionian Sea, this natural beauty of a yoga retreat is former headhunter Ingrid Gottschalk’s labour of love. Every detail of the retreat, from the carefully curated interiors with Indian charpoy daybeds to the bamboo pergola, has been meticulously considered. The food sings the praises of the local Greek produce, not least since the olive oil is actually cultivated by Gottschalk herself. Based loosely on vegetarian Ayurvedic cuisine, the retreat’s menu is also organic, local and seasonal, with daily trips to the market to source the very best and freshest ingredients. Typical dishes encompass mushroom polenta tarts, cinnamon-butter griddled peaches and, of course, the very best olive oil. By its own definition, Itha108 aims to create a happy balance between deliciousness and healthiness.
itha108.com

The food sings the praises of the local Greek produce, not least since the olive oil is actually cultivated by the owner herself. 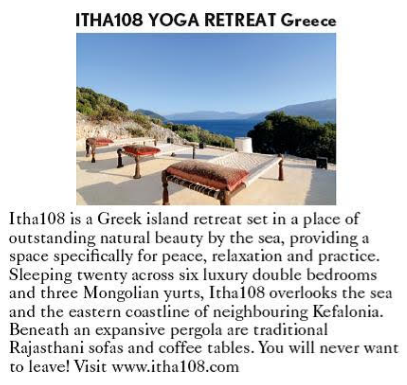 “A small retreat designed with extraordinary good taste and special care for detail, great comfort and charm. Set in a beautiful landscape, carefully positioned with beautiful views and space, Ingrid has created an oasis of beauty and peace where she teaches yoga and meditation and where guests can enjoy her delicious cooking and fresh food .  It was a treat to spend a few nights there.”

Tash invited a small group of keen yogis to Itha108 from her studio Suzanna Ferreira Physio Therapy in Hampstead, London.

The day they arrived it was overcast, with the last bit of rain, so we had to have dinner inside. The following day a clear blue sky invited everyone for practising outside and a swim. From day to day the temperature rose to 27C and we could hardly believe it was mid October.

The photos are before and after, no explanation needed. 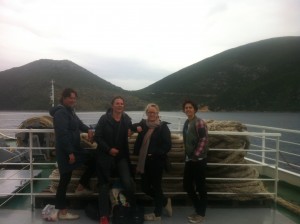 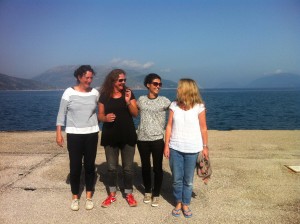 After day one mornings’ class everyone was looking forward to a Thai yoga massage. Instant relaxation..AMAZING! 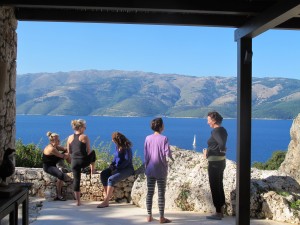 Yoga: The Itha108 yoga studio is a brand new yoga retreat located in Agios Iaonnis, an ideal place for spiritual renewal through ‘sun salutation’. It is the brainchild of Ingrid Gottschalk which has as it’s core  a
philosophy to make everyone feel welcome and relaxed. Staying at the studio includes both elegant rooms, each with its own character and yurts for a more intimate accommodation experience, with its discreet luxury as the main link, the summer resort of yoga halls, social and quiet spaces, is available exclusively for yoga retreats. In other seasons (autumn, winter, spring) Itha108 is open for all to attend tri-weekly drop in classes in Yoga.

In 2009 Ingrid Gottschalk bought a stretch of land that was nothing more than craggy boulders and wild oak trees. A year later Greece’s economy imploded. Against this challenging backdrop Ingrid created Itha108, completing it in just eighteen months – but for anyone who knows Ingrid this isn’t in the slightest bit surprising. This Swiss-German is one determined, indefatigable woman – she has manned a City team, raised three girls and climbed Mont Blanc.

The two yoga shalas – one outdoors and one indoors – ground the space. The fifty foot wooden platform, tucked away to the side of the house, immerses all of your senses in nature. In front of you lies the silvery Ionian sea, behind you the rocks and boulders of the mountain, and above you the rustling leaves of wild oak trees. Listen to the gentle bells of grazing goats and breathe in the scrunch of wild sage as you journey to Savasana.

Reached by a vivid orange staircase, the indoor shala nestles cave-like beneath the house. Retreat here in the winter and meditate on the brass statue of Lord of the Dance, Shiva Nataraja, grounding you in the eternal cycle of creation, preservation and dissolution as you gaze out of the window at the yellow white stone from which Itha108 was carved. I can imagine no greater heaven than lying on the polished dark wood floor at the end of practice, snuggling down on a mat warmed by state-of-the-art under floor heating.

It was a long journey from London but after just one yoga class I began to feel anchored. The air of comfortable familiarity extends well beyond the mat, pervading the whole retreat and giving it a home-from-home feel. There are plenty of spaces for lounging – an indoors-outdoors sitting area with more of those spectacular views, a dazzling white breezy roof terrace with views of Kefallinia (perfect for a sundowner), woven charpoy daybeds, Indian bed swings with linen covered mattresses and a cosy sitting room complete with oversized sofa and armchairs, a well-stocked library, framed photos of Ingrid’s three beautiful girls, board games and Asian artefacts.

Much of the furniture, a clever combination of sleek modern style and traditional craftsmanship, comes from Rajasthan, designed and commissioned by Ingrid herself. Shipped in a forty-foot container, when it arrived in the village of Stavros it attracted hordes of curious locals who gathered to watch it being transferred onto smaller trucks that could manage the winding roads down to Itha108.

All the bedrooms have an Indian accent; traditional Rajasthani mirrors and silk bedspreads, stained wood ceilings and tapestry stools. The bathrooms, on the other hand talk twenty first century, with power showers and eco flush loos.

Breakfast, served on a sinuous polished white plaster counter, is simple and delicious. Help yourself to plates heavy with fruit – succulent figs, grapes, juicy peaches, and refreshing melon, Greek yogurt and local honey, plates of cheese and tomatoes, ginger tea or ask for eggs and a mug of strong coffee. Breakfast can be a long drawn out affair – hours are lost chewing over the matters of the day with newfound friends.

After yoga and breakfast (usually early afternoon) we’d head for the sea, sometimes accompanied by the charismatic Olympia – a collie husky mix who takes you to heart as if she’s known you forever.

There are three beaches within a ten-minute walk, each with a different character. The biggest one has parasols, sunbeds and plenty of opportunities for people watching. The other two are smaller – with plenty of hidden coves that feel like your own private beach.

All the beaches on the island are very clean, with some clear turquoise water but all of them have chalky white pebbles – very pretty but a bit of a pain to walk on, so take a pair of flip-flops or pick up a pair of rubber bottomed shoes in town (expect to pay around eight euros).

Part of the charm of Ithaca is that it’s so quiet – the island is forty-six square miles and has just 3,500 inhabitants in winter. However, there are a few very pretty harbour towns and villages for mooching about.

Highlights include Kuoni, perhaps the prettiest and certainly the most glamorous – when we there Roberto Cavalli was in town. Vathy is the capital and has several harbour-front cafes – take a seat and soak up the accents; Greek,French and Italian, Australian and South African – part of the returning diaspora whose parents left after the earthquake of 1953.

Leaving Itha108 felt like leaving a treasured home; by the end of my stay I felt more myself than I had in years. Though perhaps not ready to climb Mont Blanc I was grounded, re-energised and ready for almost anything.

Lucy Edge is the author of Yoga School Dropout and founder of YogaClicks.

Itha108 is taking enquiries from teachers for 2015. 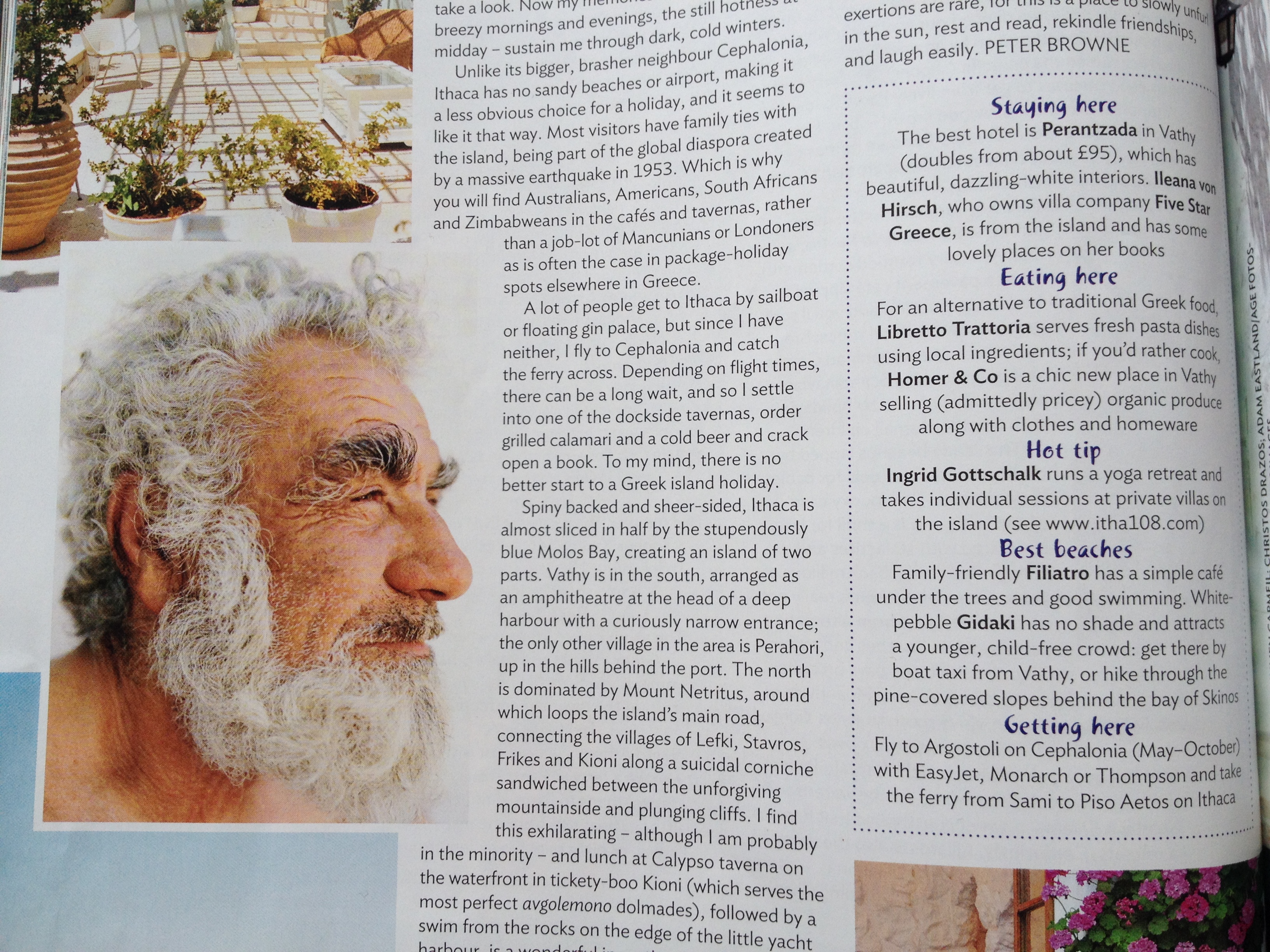